Da Nang is located in the center of Vietnam, on the East coast, and is said to be the third biggest city in the country. It’s one of the most important port of the region, but it’s also a very fast moving city. Its urbanisation and its level of development is higher than most of the areas in Vietnam, and it’s a pretty interesting city overall.
The long and clean beach that you’ll find in Da Nang brings a certain feeling of freshness to the entire city, which is perfectly mixed with its high level of development. Infrastructures of all kinds are modern and were thought in a very efficient way which offers an easier daily life to every inhabitants in the city. Roads seem to be way bigger than almost everywhere else in the country, and are perfectly maintained and taken care of.
Another good example of the different vision that Da Nang represent is the fact that all the different governmental and national administration offices are located in one single very modern building, that kinda looks like the worldwide famous London Gherkin, this egg-shaped skyscraper.
All of these points and many others will make you think that the entire development and growth of Da Nang was carefully planned, and that those who planned it choose to prepare the city to be able to handle the expected explosion of its population and its economy. Thanks to that high level of planning, Da Nang is now able to focus on developing its international presence, and it seems to be working pretty well. The latest example of that success is the fact that Da Nang hosted the APEC Vietnam 2017 early November last year. A few economic leaders attended this event, including the president of the United-States: Donald Trump. 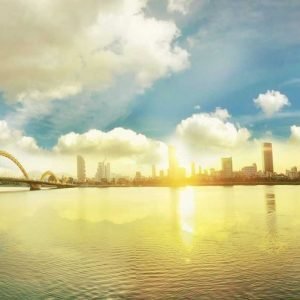 Da Nang is also pretty awesomely located, and very easily accessible. A 3 hours drive will bring to to Hue, and a very short 30 minute drive will allow you to discover the ancient town of Hoi An, one of the most beautiful part of the country, with its awesome beaches and wonderful old-time village…
Share